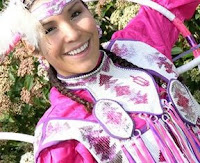 Violet John gained international attention as the first women of Taino heritage to win the coveted Miss Indian World title in 2006. Violet’s mother Rosa is a Taino from Cuba while her father Melvin is Cree from Canada. Duncan is a talented flute player who performs with the musical ensemble “Estun-Bah“, which means “For the Woman” in the Apache language. Duncan produces the group’s music whose latest CD called “Sounds of Beauty” blends traditional Apache cane flutes and northern plains wooden flutes with the acoustic guitar and violin.
Photo: Violet John (Credit: Aboriginal Youth Network)