CARIFESTA 2008 to be held in GUYANA 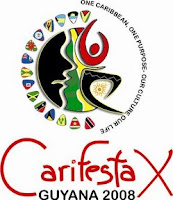 UCTP Taino News - CARIFESTA stands for the Caribbean Festival of Arts and this year the region’s roving, multidisciplinary, mega arts festival will return to its birthplace – Guyana – from August 22 to 31 2008. CARIFESTA attracts a wide range of creative artists from various Caribbean and Latin American countries and was the culmination of a concept that began in 1970 when participants at an Artists and Writers Convention in Guyana complained about the absence of an outlet to showcase the rich cultural heritage of the Region. Since its inaugural launch in 1972, previous CARIFESTA have taken place in Guyana, Jamaica, Cuba, Barbados, Trinidad and Tobago, St. Kitts and Nevis, and Suriname. The Indigenous Peoples of the region have historically participated within the festival and in 2006, CARIFESTA coincided with an historic meeting of the Caribbean Organization of Indigenous Peoples (COIP) in Trinidad. During this meeting the COIP Secretariat was officially “handed over” from Guyana to Trinidad and a Declaration of Unity was entered into between the Santa Rosa Carib Community and the United Confederation of Taino People.
UCTPTN 02.11.2008
Posted by UCTP TAINO NEWS at 3:42 PM