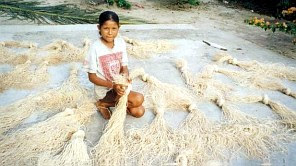 , (UCTP Taino News) - A group of Barbadians have decided to come together and sponsor an unprecedented 4-day long sports festival on in in July 2007. The historic sporting event will feature such activities as archery, spear-throwing, cricket, canoe-racing and football - for both males and females in the tribe.

The idea started with Damon Corrie, a well known Barbadian of Guyanese Arawak descent who stated that he wants to give the Arawak youth something positive to apply their natural talents to; and prepare for every year from now on.

Corrie hopes to widen the scope by next year and turn it into what would be Guyana's first 'National Inter-Tribal Games' in 2008 - which would be a 9-day long mega-event, and he foresees potential for an eventual Hemisphere-wide or even Global 'Inter-Tribal Olympics' possibly being held in Bolivia in the future. would be a logical choice for this type of initiative as it currently the only country in the world with an Indigenous President, government, and an indigenous majority of the national population.

The current July 2007 event will be known officially as the 'Ernest C. Simon Memorial Sports Festival' - in honor of Corrie's sport's loving Arawak brother-in-law who died in 2001 at the age of 33. Simon was a resident of the .

Corrie said that although he put the idea to his relatives in in a very last-minute fashion - they immediately saw the merit in it and offered to donate prize money and trophies (which are being made by the firm of D. Blades Trophies Ltd.). Relatives and tribal-relations abroad are also getting involved with the United Confederation of Taino People (UCTP) committing to sponsor the traditional spear-throwing competition.

UCTP President and Chairman, Roberto Mucaro Borrero stated "this is a wonderful initiative and something all Indigenous Peoples can be proud of; it is my hope that our community can come together to send a team of Taino youth to compete at a future event."

The Makushi Tribe ( and ) and members of the Kalinago Carib Nation of Dominica have already expressed interest in participating in 2008.

After the Festival the event winners and a list of donors will be made public in a press-release and photos will be posted on-line.

For more information or if you would like to make a contribution, please contact Damon Corrie via e-mail at damoncorrie@yahoo.com or by cellular phone: (246) 253-2613
Posted by UCTP TAINO NEWS at 10:16 AM