Chichen Itza Among the Leaders of New 7 Wonders contest 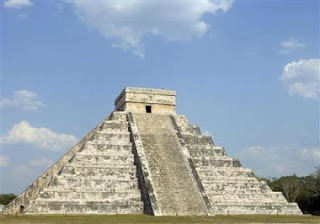 LISBON (UCTP Taino News) - Mexico's Mayan city center of Chichen Itza is among the leaders in a competition, ending in one month, to choose the New Seven Wonders of the World, the campaign organizers reported on Thursday.
The winners will be chosen through a global online and phone vote, organizers of the New 7 Wonders of the World (http://www.new7wonders.com/ ) competition. Among the 21 “wonders” selected to the finalist list, three represent ancient indigenous cultural heritage including the Inca city of Machu Pichu in Peru, the monolithic Moai statutes of Rapanui (Easter Island), and Chichen Itza located in the Yucatan peninsula.
Over 50 million people have voted so far in this global competition to produce a 21st century list of the world's greatest man-made heritage sites. The original seven wonders of the ancient world were chosen by the Greeks more than 2000 years ago.
The winning list will be announced in Lisbon on July 7, 2007.
Posted by UCTP TAINO NEWS at 6:40 PM