A matter of choice; Columbus Day vs. Native Resistance Day or Indigenous Day of Remembrance 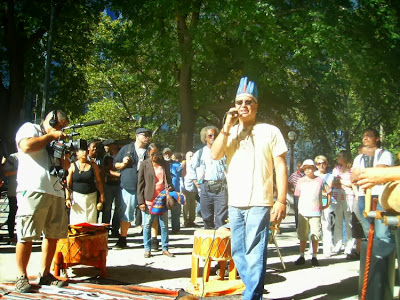 On October 12th, people throughout this side of the World may celebrate one of the above. It is a matter of choice, since those who hold power and continue to oppress, are the ones who have monopolized the history taught in our schools.

The timing of the Federal Government shutdown is exemplary of the many faces of Columbus. Think about it, the majority of people in the United States disagree with the shutdown, yet it seems that the people have no say! The positive element of this, is that now it is out in the open; how much disregard is given and/or held for the wants of “the people” vs. the interests of a few, who manage and manipulate the system affecting directly or indirectly the lives of millions of people. This shall show you who’s who and what they truly stand for!

When I was a young teenager in Borikén (Puerto Rico), The Real Spanish Academy (Real Academia Española), an organization that determines which words one can use and consider “valid and proper” in the Spanish language, decided to create the word “aparcar” (to park), when the anglicism “parkear” was used to such an extent that everyone knew what it referred to (as opposed to using the word “estacionar”).

I make the correlation, because I think that if we continue calling October 12th, Native Resistance Day or Indigenous Day of Remembrance, eventually calling it “Columbus Day” will become obsolete, and hopefully it will be changed officially.

This Federal Holiday was implemented 76 years ago , by the efforts of Italian immigrants. They had started celebrating it earlier in the state of Colorado.

In my opinion, to celebrate Columbus is to celebrate Greed, Abuse (of all types), Rape (indistinctively, meaning women, men, and children), Slavery, Land grabbing, Exploitation, and injustice, just to name a few.

We have been subjected to a bunch of lies and romanticized stories at school and our children continue to be taught the same.

One cannot say, that is all for Justice while celebrating INJUSTICE!

On this October 12th, you have a choice, and that includes the choice of not choosing.

What will it be for you? Your choice defines you!