Inspection of the Jákanas River Section near PO29 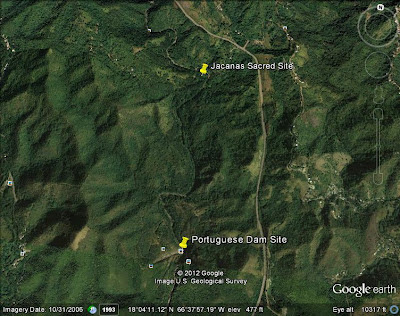 May 4th, 2012: Inspecting the  Jákanas (Jacanas) River section near the PO29 Jákana Taino Sacred Site of the Portuguese Dam Project in Ponce, I could hear the roar of the river valley discharging 3 days of solid rainstorm water runoff. 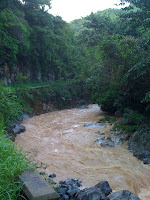 You can see by the photographs taken this afternoon that the river is swollen with runoff water.  This happens often.

I visited the public access road to the security outpost that prevents unauthorized persons from entering the $ 375 million dollar dam site.  I was stopped and questioned and not allowed to proceed.  The swollen river was contained by the steep riverbank with no obvious flooding.

By accessing internet maps of the area I determined that the sacred site is some distance from the actual dam with a overhead height difference of only 50 feet.  The dam is expected to be 220 feet high for the primary purpose of flood control providing flood protection for 40,000 people and over 13,000 residential structures downstream in the city of Ponce. The dam is the final component of the Portugues and Bucana Flood Protection Project.  (check out youtube video at  http://www.youtube.com/watch?v=xksbMvB7bLA and in English at   http://www.youtube.com/watch?v=n-QFub1fsYQ)

The dam is not finished, it has progressed at a rapid rate but still is only half complete.    The river continues to pass through the dam area thru conduits of the Portugues  Dam outlet works designed to provide for river diversion during construction of the dams. 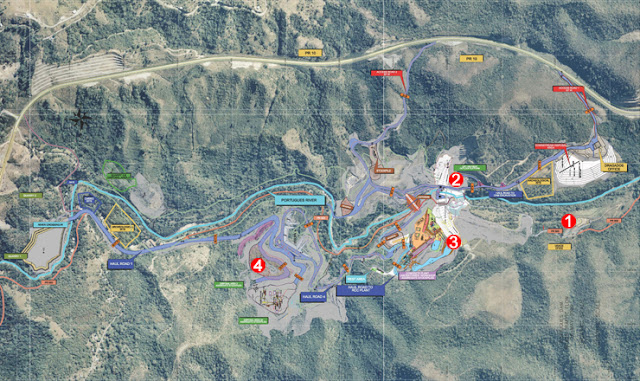 During excavation, a 130 x 160 ft (49 m). A Pre-Columbian era ceremonial plaza, "batey" or ball court used by the ancient Taino was discovered at a disposable site for the Portugues Dam's construction. A 60 ft (18 m). long row of intricately carved stones bearing petroglyphs that appeared to date to the 11th or 12th Century were discovered. Additionally, a burial ground containing at least 40 well-preserved sets of human remains was discovered. 15% percent of the site is believed to be discovered with as many as 400 bodies buried. The site had been initially marked during a cultural resource survey in 1979 but excavation work in 2007 prompted the major discovery.[6]