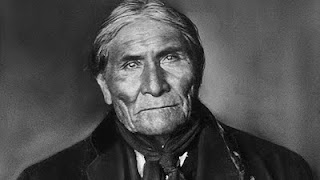 Apache Warrior Geronimo was discussed at a hearing of the U.S. Senate Committee on Indian Affairs
Washington, D.C. (UCTP Taino News) – The U.S. Senate Committee on Indian Affairs held an Oversight Hearing entitled ‘Stolen Identities: The Impact of Racist Stereotypes on Indigenous People’ on Thursday. Several Native American leaders and advocates were invited to testify. The hearing also focused on the U.S. military’s use of the code name Geronimo during the mission that led to the death of Osama bin Laden.

Speaking at the hearing Sen. Tom Udall (D-NM) stated "I find the association with bin Laden to be highly inappropriate and culturally insensitive," The Senator continued noting that the incident “highlights a serious issue… a socially ingrained acceptance of derogatory portrayals of indigenous peoples."

Geronimo's great-grandson, Harlyn Geronimo, released a statement calling the use of the Geronimo name ‘insulting and slanderous’.

American Indians from around the Nation are calling for an official apology.

In an official statement submitted to the Senate Committee, the United Confederation of Taino People (UCTP) not only called for an apology but a ban on the use of American Indian names, iconography, and icons in the U.S. military. The UCTP noted as that many Native Americans – including the Taino People – continue to serve honorably in the U.S. Armed Forces this practice is not only ‘offensive’ but promotes ‘racial stereotypes.’