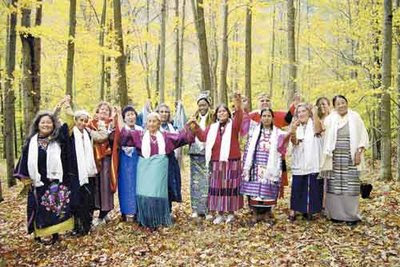 Photo courtesy Marisol Villanueava -- Thirteen indigenous grandmothers, formally known as the International Council of Thirteen Indigenous Grandmothers, initial greeting at the Vatican was not pleasant. The group was almost kicked out while performing a prayer and waiting to speak with Pope Benedict XVI.
by: Rob Capriccioso

ROME - They went to pray. They went to see Pope Benedict XVI on his home turf. They went to ask that he rescind historic church doctrine that played a role in the genocidal onslaught of millions of indigenous people worldwide.

For 13 indigenous grandmothers, accomplishing only one of their three goals wouldn't have been so bad - had they also not been harassed by several Vatican policemen who claimed the women were conducting ''anti-Catholic'' demonstrations.

The elders, formally known as the International Council of Thirteen Indigenous Grandmothers, convened in the morning hours of July 9 at St. Peter's Square. After setting up an altar cloth, candles and sacred objects, including feathers and incense, they began holding a prayer and ceremony circle. Nine-year-old Davian Joell Stand-Gilpin, a direct descendant of Chief Dull Knife of the Lakota Nation, was brought along by one of the grandmothers to participate in traditional regalia.

Soon, however, four Vatican police officials asked the women to stop the prayer ceremony, claiming their prayers were in contradiction to the church's teachings - despite the two crosses on the alter cloth and some of the members being practitioners of the Catholic faith.

The officials told Carole Hart, an Emmy and Peabody award-winning producer and filmmaker traveling with the grandmas, that the group was in violation of Vatican policy. They said a permit Hart had obtained in order to document the prayer gathering was only relevant in terms of filming, but did not allow the women to pray, sing or burn incense.

The police said the actions of the grandmothers were ''idolatrous.''

Through the course of obtaining the permit, Hart had written to Vatican officials explaining that the grandmothers would be conducting a prayer ceremony at the site.

''We stuck to the fact that we were legitimately there with this permit,'' Hart said. ''The grandmas did not back down.''

Still, the police urged the grandmothers to move on; but Hart and the group appealed the decision to a higher authority. Finally, the police brought back a law official who assessed the situation. Upon seeing 13 indigenous elder women and hearing one of their songs, the official concluded there was no problem with the ceremony.

The official also ultimately invited the grandmothers to enter St. Peter's Basilica to rest and pray.

Despite their short-term success, the ultimate goal of the grandmothers - to hand-deliver a statement to Pope Benedict XVI, asking him to rescind several controversial papal bulls that played a part in the colonization of indigenous lands - was thwarted.

Documents from the 15th century, such as the papal bulls, show the papacy played a role in the genocidal onslaught that affected millions of indigenous people on the North American continent. In 1455, for instance, Pope Nicolas authorized Portugal ''to invade, search out, capture, vanquish and subdue all Saracens and pagans'' along the west coast of Africa, enslave them and confiscate their property - which set the tone for European interaction with the indigenous peoples of the Western Hemisphere.

Just a short time before the grandmothers left for their long-planned journey to Rome, Pope Benedict XVI announced that he would be leaving the Vatican to rest at his summer home, called Castel Gandolfo, in preparation for a trip to Australia.

The pope had originally been scheduled to be in residence July 9. Laura Jackson, the grandmothers' publicist, described the pope's decision to leave the Vatican as a ''sudden cancellation'' and noted that the grandmas held tickets to a scheduled public audience he was to have held that day.

While Castel Gandolfo is less than 20 miles away from the Vatican, the grandmothers ultimately decided not to make the journey to the pope's summer getaway despite some in their inner circle encouraging them to pay an unexpected visit.

Hart believes the grandmothers chose to focus on St. Peter's Square because it's part of the Vatican and is a strong symbol of the pope.

''As women of prayer, I think they felt that bringing their prayer there, on the very ground on which the church as an institution stands, as close as they could get to the heart of the church, would have a great effect on what will happen next,'' Hart said. Additionally, the women had no guarantee that they would even be able to enter the grounds of the pope's summer residence.

Instead, the elders left a package with one of the pope's personal guards at the Vatican. The package contained a written statement the women had sent to the Vatican in 2005 decrying the papal bulls, to which the Vatican never responded. It also contained a new 632-word statement to the pope asking him to repeal three Christian-based doctrines of ''discovery'' and ''conquest'' that set a foundation for claiming lands occupied by indigenous people around the world.

''We carry this message for Pope Benedict XVI, traveling with the spirits of our ancestors,'' the women said in their new message. ''While praying at the Vatican for peace, we are praying for all peoples. We are here at the Vatican, humbly, not as representatives of indigenous nations, but as women of prayer.''

The package was given to the pope's guard via a traditional Lakota manner, by extending it to him three times with him then accepting it on the fourth attempt. The entire process was captured on film, and is expected to be made into a documentary by Hart in the coming year.

It is unknown whether the pope has yet personally received the package, but legal scholars and Native activists in the U.S. have nonetheless been paying close attention to the grandmothers' journey.

''I think the trip is very significant,'' said Steven Newcomb, co-director of the Indigenous Law Institute and author of the book, ''Pagans in the Promised Land: Decoding the Doctrine of Christian Discovery,'' and an Indian Country Today columnist.

''These are women who are very much grounded in their own languages and traditions. They're able to raise visibility of the issue in ways that others are perhaps less effective.''

The grandmothers from the U.S. who sit on the women's council are Margaret Behan, of the Arapaho/Cheyenne of Montana; Agnes Baker Pilgrim, of the Takelma Siletz; Beatrice Long Visitor Holy Dance and Rita Long Visitor Holy Dance, both Oglala Lakota of Black Hills, S.D.; Mona Polacca, Havasupai/Hopi; and Rita Pitka Blumenstein, Yupik Eskimo.

All of the grandmothers are currently in private council in Assisi, Italy, and are expected to be returning home by early August.
Source: http://www.indiancountry.com/content.cfm?id=1096417739
Posted by UCTP TAINO NEWS at 11:46 PM

This is a serious incident of intolerance and racism that I condemn without any appeal. Moreover, I condemn the serious censure of Italian media, Tv, Radio e newspaper, nobody has reported this news. This complaint is not justified. This news was published on my Blog, "Native Americani.it" I hope that it can be read by many people, the truth should not be censured.
Alessandro Profeti, Italy
http://www.nativiamericani.it
Italian Blog on Support Native American People