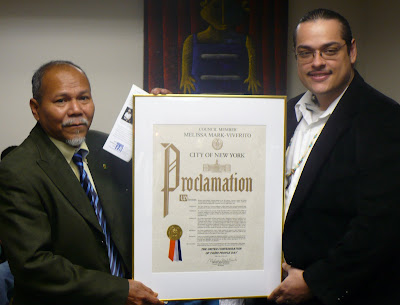 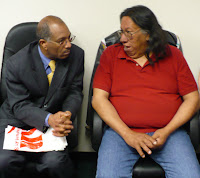 The gathering opened with a welcome by Ambassador Gregoire and a prayer by Milo Yellow Hair of the Oglala Lakota Nation. A Wounded Knee Veteran and AIM member, Mr. Yellow Hair also noted that the gathering put to rest the “myth of extinction” of Caribbean Indigenous Peoples.

An opening address was given by Chief Charles Williams who spoke on the history of the Kalinago People and of the importance of unity among Caribbean Indigenous Peoples. Chief Williams also thanked the Permanent Mission of Dominica for their support and expressed that he was “very proud of the Declaration of Unity signed between the Kalinago and Taíno Peoples”.

Statements were also presented by Hereditary Lokono Arawak Chief Damon Corrie of the Eagle Clan Arawaks and Kasike Roberto Mukaro Agueibana Borrero representing the UCTP and Iukaieke Guainia. Chief Corrie pledged to continue to work toward strengthening the solidarity among Indigenous Peoples of the region. In an example of his commitment he presented a letter of congratulations to the UCTP from Pakuri Lokono Arawak Chief

Pierre Andrews from the Upper Mahaica River in Guyana, South America Guyana. On behalf of the Eagle Clan Arawaks, Corrie also presented a ceremonial chief’s staff to Borrero in recognition of his work to unify Caribbean Indigenous Peoples throughout the islands and beyond.

Borrero gave a brief history of the UCTP and introduced the various UCTP representatives and community members in attendance. He reaffirmed the important work that has been accomplished at the United Nations, which continues to increase the visibility of the Indigenous Peoples of the Caribbean. Borrero also recognized the contributions and support of Ambassador Gregoire, Ali El Issa of the Flying Eagle Woman Fund, and Pamela Kraft of the Tribal Link Foundation. On behalf the UCTP, Ambassador Gregoire, El Issa, and Kraft were all presented artworks by artists John Aguilar Marrero 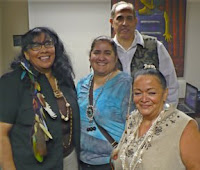 and Reina Miranda of the Cacibajagua Taíno Cultural Society.

Among the other distinguished guests present during the celebration were Andrea Carmen and Ron Lehman of the International Indian Treaty Council. Ms. Carmen commented on the important contribution of the Government of Dominica towards the adoption of the Declaration on the Rights of Indigenous Peoples and the recent affiliation of the UCTP with the Treaty Counci 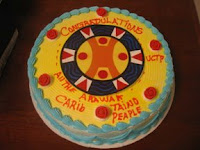 The special presentation segment ended with the reading of the Proclamation issued by New York City Council member Melissa Mark Viverito, which recognized “10 years of distinguished service to Taíno, Carib, and Arawak Peoples of the Caribbean and the U.S.” In an historic moment for the Taíno community, the Proclamation also designated Apr 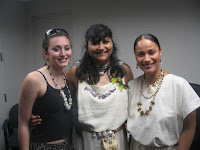 il 25, 2008 and “hereafter” as United Confederation of Taíno People Day in the City of New York.

Closing the historic celebration was a song to honor Mother Earth presented by members of the Cacibajagua Taíno Cultural Society.
UCTPTN 05.04.2008
Posted by UCTP TAINO NEWS at 3:15 PM