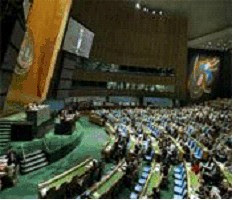 New York, 13 September - Marking an historic achievement for the more than 370 million indigenous peoples worldwide, the General Assembly today adopted the Declaration on the Rights of Indigenous Peoples, the result of more than two decades of consultation and dialogue among governments and indigenous peoples from all regions.

"Today, by adopting the Declaration on the Rights of Indigenous Peoples we are making further progress to improve the situation of indigenous peoples around the world," stated General Assembly President Haya Al Khalifa.

See full story at:
http://indigenouscaribbeancaucus.blogspot.com/2007/09/historic-milestone-for-indigenous.html
Posted by UCTP TAINO NEWS at 3:56 AM

Email ThisBlogThis!Share to TwitterShare to FacebookShare to Pinterest
Labels: UN Declaration on the Rights of Indigenous Peoples, United Nations