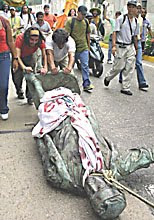 CARACAS, Venezuela (Reuters) - Supporters of Venezuelan President Hugo Chavez celebrated Columbus Day on Tuesday by toppling a statue in Caracas of the explorer whom Chavez blames for ushering in a "genocide" of native Indians.

Police firing tear gas later recovered parts of the broken bronze image, which was dragged by the protesters to a theater where the Venezuelan leader was due to speak.

The new name honored Indians killed by Spanish and other foreign conquerors following in the wake of the Italian-born Columbus who sailed in the service of the Spanish crown.

As the left-wing nationalist president led celebrations on Tuesday to honor Indian chiefs who resisted the Spanish conquest, a group of his supporters conducted a mock trial of a statue of Columbus in central Caracas.

They declared the image guilty of "imperialist genocide," looped ropes around its outstretched arm and neck and heaved it down from its marble base. No police or other authorities intervened as the protesters drove off in a truck yelling, "We've killed Columbus!"

"This isn't a historical heritage. ... Columbus is the symbol of a conquest that was a globalization by blood and fire, a cultural massacre," said Vitelio Herrera, a philosophy student at Venezuela's Central University.

Outside the Teresa Carreno theater, the protesters hung the statue from a tree and then let it fall to the ground. Police arrested several of them.

Chavez has called Latin America's Spanish and Portuguese conquerors "worse than Hitler" and the precursors of modern-day "imperialism" he says is now embodied by the United States, the biggest buyer of his country's oil.

The base of the toppled statue was daubed with slogans such as "Columbus = Bush. Out!"

The protesters, many who wore red T-shirts with slogans supporting Chavez, repeated the Venezuelan leader's fierce criticism of the U.S.- led occupation of Iraq.

"Didn't they tear down the statue of Saddam Hussein, the dictator of Iraq? For me, (U.S. President George W.) Bush represents barbarity and Chavez represents civilization," said 57-year-old Orlando Iturbe.

Some passersby were shocked. "I don't agree with this," said Jose Luis Maita, who watched with his wife and small daughters.
Venezuelan demonstrators use ropes to topple a Christopher Columbus statue in Caracas, October 12, 2004. Demonstrators protested during Columbus Day, a date which Venezuelan President Hugo Chavez has christened as the 'Day of Indian Resistance' to commemorate the Indian people who fought the Spanish colonizers.

It's about time to get rid of this evil genocidal pig Christopher Columbus. He's a bloody murderer !.