Stingrays, Retaliation and the Moral Progress of Man

Last week, the much of the world was shocked and saddened to learn that during the filming of an underwater documentary, a stingray barb fatally pierced the chest of celebrity conservationist Steve “Crocodile Hunter” Irwin.

Admired the world over for his passion for wildlife conservation, it seems that some of Irwin’s “fans” may now be hunting and killing rays in retaliation for his tragic death.

Stingray bodies are turning up on beaches in Queensland on Australia’s eastern coast. According to a recent statement by the state fisheries department, at least two were discovered with their tails cut off.

The executive director of Irwin's Wildlife Warriors conservation group, Michael Hornby is concerned the rays were being killed in some sort of retribution, or it may be fear or “yet another callous act toward wildlife.”

“Killing stingrays was not what Steve was about" stated Hornby.

Caribbean Indigenous Peoples should be especially dismayed over this news as we have a long relationship with these usually shy, non-aggressive fish that frequent the sea bottom in their search for food.

As our ancestors, many contemporary Taino descendants still interact with the sea on a daily basis, and encountering stingrays are not uncommon. On the island of Boriken (Puerto Rico), in areas like Guanica and Guayanilla, local “pescadores” or fishermen refer to stingrays by indigenous names such as “Libisa” or “Chucho.”

These creatures can have serrated spine up to 10 inches long on their tails. This “stinger” can be lashed into an unfortunate person when a ray is stepped on or feeling threatened. However, while the spines can emit a toxin that can be deadly to small creatures, few people have ever died from the poison. There is more danger in the infection a stingray wound can cause when it tears skin.

Stingray vertebrae spines have been recovered in many archaeological deposits. In ancient times, stingray-spine tipped spears and arrows were used mainly for hunting and fishing. Some spines also display clear evidence of their use even for warfare. At one Taino burial site, on Boriken’s northern coast, a human skeleton with a stingray spine lodged in his ribcage was excavated by archeologists.

Among the closest relatives of the Taino, from northern South America into the Amazon, the stingray is also highly respected and honored. Beautifully woven palm fans created by the Lokono (Arawak) and other Indigenous Nations even mimic the form of stingrays.

These are but a few examples of the ancient relationship between Caribbean Indigenous Peoples and these fascinating creatures. This is a relationship that is based on balance and respect, not fear. The unique attributes of stingrays are worthy of our continued admiration as they display values that are a model for human behavior.

As the elder “pescadores” in Boriken and other islands have stated with regard to the stingray and their relative the shark, “we need to respect these creatures especially when we enter their world.” Many of these old-timers have even related to me that they did not even enter the sea recreationally as we do today.

It was the Indian political and spiritual leader Mahatma Gandhi who once stated “The greatness of a nation and its moral progress can be judged by the way its animals are treated."

Our ancestors understood this and perhaps if the wisdom of the elders was heeded attitudes towards stingrays and other misunderstood creatures would change. 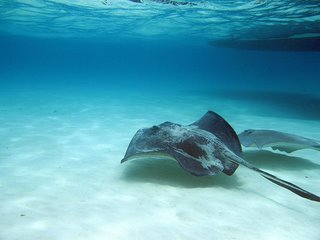 Stingrays near the Cayman Islands
Posted by Roberto Mucaro Borrero at 11:33 AM