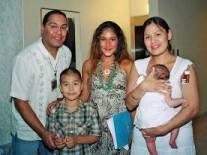 Kofi Annan noted “the annual observance of this International Day recognizes the achievements of the world’s indigenous people, who number more than 370 million and who live in some 70 countries. But it is also a moment to acknowledge the critical challenges they face.”

The program, entitled “Indigenous Peoples: Humans Rights, Dignity and Development with Identity,” opened with a prayer blessing and welcoming songs from Barbara James Snyder (Washoe/Paiute). Presentations were made by UN agency representatives, a representative of the government of Peru, PFII member Chief Wilton Littlechild (Cree), and actress Q'Orianka Kilcher. Ms. Kilcher is of descendant of the Huachipaeri and Quechua Nations and she gave an impassioned statement from a youth perspective. The young star who portrayed Pocahontas in the film “The New World” stated that she felt a “strong responsibility towards the dream for universal dignity, compassion and basic Human Rights as a form of true human development.”

The event’s Master of Ceremonies, Roberto Mucaro Borrero (Taíno), welcomed Kilcher’s statement and provided as an example the racist portrayal of Caribbean Indigenous Peoples in their Disney’s film Pirates of the Caribbean: Dead Man’s Chest”.

Cultural presentations were made by members of the Crimean Tater Association (indigenous from the Ukraine) and by Tama Waipara (Maori). An Indigenous Art Exhibition by Inty Muenala (Kichwa) was also on display.

Borrero closed the Day’s activities with a song in the Taíno language.

In 1994, the UN General Assembly decided that the International Day of the World's Indigenous People shall be observed on 9 August every year during the International Decade of the World's Indigenous People. The date marks the day of the first meeting, in 1982, of the UN Working Group on Indigenous Populations of the Subcommission on the Promotion and Protection of Human Rights.
Photo: The Borrero family at the UN with actress Q'Orianka Kilcher