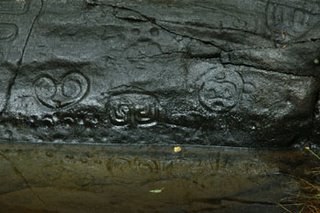 The Reef Bay Petroglyphs, above, have been proposed as a UNESCO World Heritage Site.

A May 2006 meeting of 28 world rock art experts resulted in the Reef Bay petroglyphs being chosen as a significant rock art site, and the proposal of the site as a UNESCO (United Nations Educational, Scientific and Cultural Organization) World Heritage Site.

“UNESCO contacted me to attend, and it was really kind of cool,” said V.I. National Park archaeologist Ken Wild, who attended the conference. “I felt very honored that I was one of the few chosen.”

Participants at the meeting were notified the list of significant rock art sites would be narrowed down to less than 20, according to Wild.

“Right off the bat, they let us know that they wanted to narrow it down to about 18 sites,” he said. “There are probably several thousand sites throughout the Caribbean and South America. We wanted to come up with a list of the best sites.”

In order to be considered for a World Heritage site, one must prove authenticity, integrity and chronology of the site, according to Wild.

The Reef Bay petroglyphs were carved by Taino people and are religious in nature, according to Wild.

“As Taino culture is developing, so is religion, and petroglyphs develop,” Wild said. “Ancestor worship in Native American cultures is huge. The petroglyphs were a place where the Tainos went to communicate with these other ancestors, because nothing they did in this world happened without consultation of the other world.”

The Reef Bay petroglyphs suggest the Virgin Islands were a pivotal area for American Indians, according to Wild.

“Our petroglyphs play an important function in the fact that we’re kind of in that little corner of the Caribbean, where we’ve got the Greater Antilles in one direction and South America in another,” said the VINP archaeologist.

“Some symbols found here you can find in the Greater Antilles, but not in the Lesser Antilles, or vice versa, and some symbols you find in both areas,” Wild added. “We were kind of at a pivotal point of interaction for American Indians as they traveled.”

Based on research conducted at the Cinnamon Bay archaeology lab, the Reef Bay petroglyphs are in good shape when it comes to UNESCO’s three important criteria — authenticity, integrity and chronology, according to Wild.

“For authenticity, we’ve found images like the ones at the petroglyphs in the archaeological record,” he said. “If somebody had gone to the petroglyphs and done graffiti, that would have compromised the integrity, but they are in good shape.”
Other factors considered in designating World Heritage Sites are whether the area has a buffer zone and a management plan, both of which are provided to the petroglyphs by the VINP.

“One of the big, big things about World Heritage Sites is they have to have a buffer zone, and we’re perfect,” said Wild. “They are right in the middle of a biosphere reserve, and you couldn’t ask for a more beautiful place. A lot of sites will not have that.”

Although the petroglyphs’ consideration as a World Heritage Site is exciting news, it could still be many years before that designation is made official, according to Wild.

“The exciting news is we made the list,” said Wild. “Just because it’s been put on that proposed list doesn’t mean it’s going to happen — it just means that UNESCO has started the process. It is a long process, and a lot of things can happen between now and then.”

Regardless of whether the petroglyphs are designated a World Heritage Site, they remain an important rock art site, he said.

“The Reef Bay site is important because it’s a monumental testament to ancient human art,” he said.