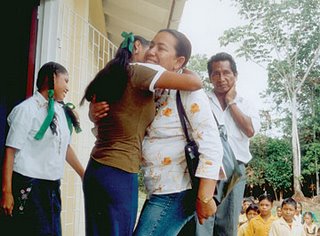 REGION ONE, GUYANA - Several villages in the Matarkai sub-region of Region One (Barima/Waini) have requested titles to and demarcation of the land they occupy, Minister of Amerindian Affairs, Ms Carolyn Rodrigues reported.

She told the Government Information Agency (GINA) that, during her June 7 to 10 visit to that region, Four Miles, a community without a Village Council, the recently re-elected Chairperson of the Community Development Council (CDC) and other villagers said they want to have a local authority as provided for in the new Amerindian Act.

Rodrigues said the population feels a body in charge at Four Miles affairs and titling would give the community more power and allow for increased benefits. She said she was also informed that having the titles is necessary as outsiders have been going there and making use of agricultural land which the community fervently believes belongs to residents.

Rodrigues said, at Eclipse Falls, a similar request was made for a stipulated 40 square miles believed to be the extent of community ownership.

The minister said she is happy that people in the communities have read the legislation and are now aware of the benefits they can gain through its provisions.

She explained the steps that must be taken to apply for titles, pointing out that a community has to have been in existence for at least 25 years to be eligible and the villages responded in the affirmative that they have the criteria.

Rodrigues advised the villagers to make their applications quickly so that the government can hasten the process. She cautioned that, with general elections months away and no guarantee of her retaining the portfolio, she is willing to at least start the procedure for them.

Meanwhile, GINA said, at Sebai, which is already titled, an appeal was made for extension of a plot and the minister said it would be considered by the government.

GINA said, recently, Rodrigues pointed out that, in the past 18 months, 11 new communities were titled. They are Konashen and Fairview in Region Nine (Upper Takutu/Upper Essequibo); Baramita and Arukamai in Region One (Barima/Waini); Micobie and Campbelltown in Region Eight (Potaru/Siparuni); Kaburi in Region Seven (Cuyuni/Mazaruni) and Wiruni, Malali, Muritaro and Great Falls in Region Ten (Upper Demerara/Berbice).

Those took the total number of titled villages to 85, following the previous titling of about 74 which were not surveyed or demarcated in 1976 and, therefore, had no knowledge of how much land they actually owned and the boundaries.

GINA said the 74 were less than the more than 100 that are actually in existence.

Five already titled communities were recently extended, as well and those are Tapakuma and Kabakaburi in Region Two (Pomeroon/Supenaam), Orealla in Region Six (East Berbice/Corentyne); Kamwatta in Region One and Annai in Region Nine.

Rodrigues said the government has achieved much in moving Amerindian land issues forward and, with the early March assent to the Act by President Bharrat Jagdeo after its passage in Parliament on February 16, copies of the document were distributed to all communities for perusal.

The minister is scheduled to visit Region Nine from tomorrow to June 17 to address land issues, too, GINA stated.