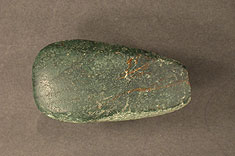 A discovery of ancient jade could shake up old notions of the New World before Columbus. Scientists say they have traced 1,500-year-old axe blades found in the eastern Caribbean to ancient jade mines in Central America 1,800 miles (2,900 kilometers) away, New York's American Museum of Natural History announced late last month.

The blades were excavated in the late 1990s by a Canadian archaeologist on the island of Antigua in the West Indies.

But the jade used to make the blades almost certainly came from Maya mines in distant Guatemala, says mineralogist George Harlow of the American Museum of Natural History.