ALBUQUERQUE -- A local drum group walked away with three different awards at the Gathering of Nations Pow Wow, which is advertised as "North America's Largest Powwow."

This year, the Gathering of Nations brought in more than 2,000 dancers that came from throughout North America. In addition, the powwow had nearly 40 drums that entered into the drum contest.

Southern Outlawz, a drum group from Shiprock, won fifth place in the "Southern Challenge" drum contest. Their women back-up singers -- the women who sing behind the seated drummers -- won first place in their division. To top it off, singers from Southern Outlawz entered a hand drum competition, taking away first place honors.

"I was nervous like crazy," said Veronica Keeswood, one of the back up singers. "I couldn't believe (we won) because there was a lot of competition."

The Southern Outlawz drum group entered a category that is mostly dominated by drum groups hailing from Oklahoma, where southern plains style singing is more common.

"We sang our best song from the heart," said J.R. Keeswood, head singer for the drum group. "We sang to have fun. We're excited to be there. I'm glad to see everything worked out really good."

In addition to the singing group competition, the dancers also competed against each other for top honors.

Adam Nordwall, 25, of Redding, Calif., was surprised when his name was called for fourth place in a powwow competition.

"It's just a real big surprise," he said. "There's a lot of really good dancers. To hear my name was pretty exciting. I couldn't believe it."

"Just being in the top five, it's quite an honor," Nordwall said.

In his division there were more than 70 dancers competing against each other.

But the competition for "North America's Largest Powwow" is just one aspect of the powwow.

For Nordwall, the Gathering of Nations marks the beginning of his travel season.

He said it's a 23-hour drive from Redding to Albuquerque and this is the second year in a row that he has made the drive.

One singer, Al Santos, took pride in the fact that the powwow lived up to its name this year, The Gathering of Nations.

For him, the powwow did that in two ways: First, Otter Trail, Santos' drum group, won fourth place in the "Southern Challenge" drum contest, and second, the new Miss Indian World, Violet John, is part Taino, an indigenous tribe that came from the Caribbean Sea islands.

Al Santos is also a Taino.

"I about had a heart attack when she introduced herself," Santos said. "I thought maybe they said something other than Taino."

The recognition of a small tribe in the singing contest and in Miss Indian World means a lot, Santos said. 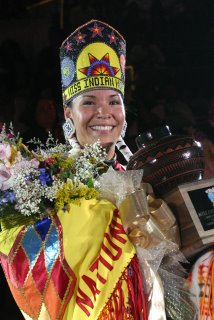 Proud of both her Cree and Taino Heritage, Violet John is crowned the new Miss Indian World at "North America's Largest Pow Wow" - the Gathering of Nations.