The well-attended sessions featured at this year’s conference were hosted at the Caribe Hilton and the Puerto Rico Convention Center from April 26 – 30th 2006. Programs were mainly structured within four categories including forums, general sessions, symposiums, and workshops.

Even with the incredibly wide topic areas being presented over three days, the organizers recognized the conference’s location and featured at a number of Caribbean oriented sessions. The opening session of the program, featured the catchy title “Islands in the Stream: Inter-island and Continental Interaction in the Caribbean”. This program was chaired by L. Antonio Curet, Curator of North American Archaeology, Chicago Field Museum. Although no Taíno or other Caribbean indigenous community leaders were invited to participate in this session, an array of interesting theories and research were presented by a host of academics. Unfortunately, like many similar conferences, few Caribbean Indigenous Peoples will see or be able to comment on these “perspectives” as the majority of these presentations are not readily available to the general public.

On a positive note, an historic precedent was set for indigenous peoples’ participation at the 2006 SAA annual meeting during a special session entitled “Current Issues in the Practice of Archeology in Puerto Rico”. Apparently, during the previous 70 years of SAA conferences, indigenous peoples or their “descendant populations” have never been invited to present their issues officially. During this session however, four Taino community leaders were able to present their views on contemporary Taino Culture as well as Caribbean Indigenous archeology at what was described by an audience member as “one of the most dynamic programs of the conference.”

The Taino session was not only attended by archeologists and academics but by indigenous archeologists or those who are interested in monitoring this field. Along with the Choctaw and Tongva organizers, members of the Piaute and Mohegan Nations were present. Taino and Paiute shared songs and after hearing the moving presentations of the Taino, the Mohegan representative remarked on the “bravery of the Taino People”. She urged the Taino presenters to “keep up their good work” and she assured them she would “report on this incredible situation to her people back home.” 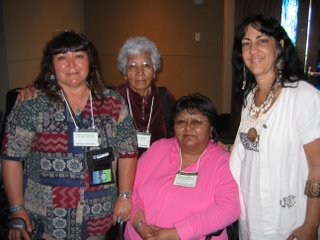 Highlighting a concern of the Taíno participants who stressed the ongoing lack of inclusion of Caribbean Indigenous Peoples in issues that concern them, there were at least 8 other sessions that focused on the Caribbean - all neglecting to include contemporary Caribbean Indigenous perspectives. One of these sessions was entitled “New Methods and Techniques in the Study of Material Cultural from the Caribbean”. This session was chaired by William Keegan, Chairman and Curator of Anthropology, Department of Natural History, Florida Museum of Natural History.

Another was entitled “Archeology in the Caribbean Region” and yet another was entitled “New Perspectives on the Prehistoric Settlement of the Caribbean”. Other sessions also covered “Archeology from Behind the Blockade: New Research in Cuba”, “Caribbean Archeological Research at the Peabody Museum of Natural History, Yale University: In Memory of Irving Rouse”, “Compliance Archeology in Pursuit of the Caribbean’s Past”, “Current Research in Bahamian Prehistoric and Historic Archeology”, and “Current Topics in Puerto Rican Archeology”. The last program was organized by the Puerto Rican Institute of Culture.

One other session did include a respected local Taino community member, Luis Sanchez, who works as a guide and a cultural presenter at the Tibes Ceremonial Center. This session was entitled “The Civic-Ceremonial Center of Tibes, Ponce, Puerto Rico” and was chaired by L. Antonio Curet. Luis opened the program sounding the guamo, the Taino conch shell trumpet. 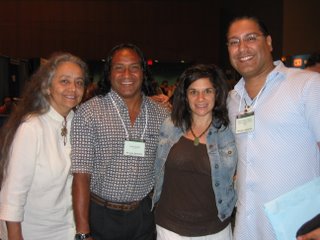