May Day 2006: A Day Without Immigrants

Illegal immigrants made their point Monday: Without them, Americans would pay higher prices and a lot of work wouldn't get done. As nationwide demonstrations thinned the work force in businesses from meat-packing plants to construction sites to behind the counter at McDonald's, economists said there can be no dispute within the context of the contentious immigration issue that the group wields significant clout in the U.S. economy. 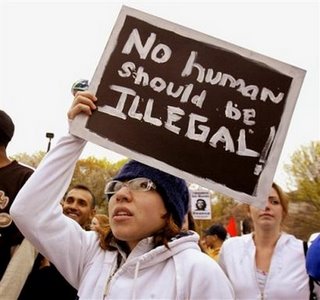 Nilda Ortiz, a 28-year-old student at the Art Institute of New England, listens to a speaker as she takes part in a pro-immigration rally on the Boston Common in Boston, Monday, May 1, 2006. Ortiz, who is of Puerto Rican decent, said she took part in the rally to stand up for immigrant's rights everywhere. (AP Photo/Stephan Savoia)
Posted by Roberto Mucaro Borrero at 2:01 PM