UCTP Stands in Solidarity with the Mohawk Nation 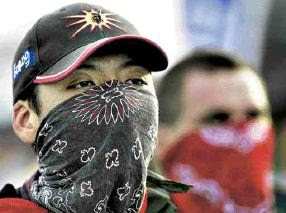 UCTP Taino News - Members of the Six Nations Reserve man a road block set up on Highway 6 to protest a housing development on land they claim as their own near Caledonia, Canada. Upon receiving the news UCTP President Roberto Mukaro Borrero stated "the Taino Nation and People represented by the UCTP stand in solidarity with Six Nations during their struggle near Caledonia". Borrero continued noting that "this issue reminds us of our own struggle on the island of Boriken and the sacrifice of our Taino leaders who took a similar action last year in Caguana. We have the people of Six Nations in our prayers".