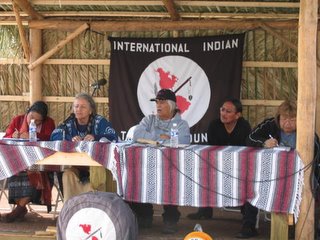 Hosted by the International Indian Treaty Council (IITC) and the Independent Traditional Seminole Nation of Florida, the conference was held at the Red Bay Grounds, which is a traditional land area of the Seminole People. This land was not given to the Seminole but rather needed to be purchased by them in order to protect and preserve this area of historic and spiritual significance to their people.

Along with four UCTP sponsored delegates from the island of Borikén, Indigenous delegates came from throughout the western hemisphere and from as far as New Zealand to take part in this important dialogue, which focused local and international issues.

Some of the themes discussed at the conference included “Treaties, Land Rights and Sovereignty”, the “Health of our Children and Future Generations”, and Defending Cultural Rights, Traditional Knowledge and Sacred Ways” and others. Borikén Taíno Community leader Naniki Reyes Ocasio was invited by the organizers to present an update on the Caguana Ceremonial Center as well as the current situation of the Borikén Taíno People. The presentation will soon be available at the UCTP web portal.

The participation of the Taíno delegates at this conference offered a unique opportunity for Taíno issues to be highlighted together with other indigenous issues from throughout the hemisphere and the Pacific.

The hospitality shown by the Independent Traditional Seminole Nation and the on-going support of Caribbean Indigenous Peoples issues pledged by IITC was welcomed by the UCTP leadership who look forward to a more official affiliation between the entities in the near future. 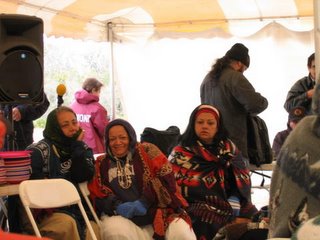