Keeping our Warriors in Our Prayers…

From the Voice of the Taino People Print Edition:
a) The Garcia Family would like to thank all who kept their son Andre in prayers during his two week stint in Iraq. He is back home for the moment but weak from having contracted food poisoning the day before he left. Andre even had IV in his arm as he waited in the airplane hangar for the plane to take off. He was told his mission in Iraq would be 2 weeks to 4 1/2 months and it was exactly 2 weeks. But because of complications while there, Andre will probably have to go back and try and complete his group’s objective. Please keep him and his family in your prayers.

b) Community member Vanessa Inarunikia Pastrana has requested prayers for her son, John Mathew “Manturey” Concepcion, who is enlisted in the U.S. Army and currently stationed in Germany but will be leaving for Iraq this week.

On behalf of the UCTP, we ask the Creator to watch over all our young warriors and return them safely to their families and our community. 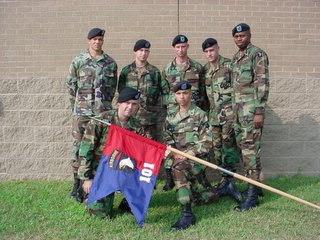 Taino community member John Mathew
“Manturey” Concepcion is the first one standing on the far left.
Posted by Roberto Mucaro Borrero at 7:37 AM