UCTP Taino News - The President of the United Confederation of Taino People (UCTP), Roberto Mucaro Borrero returned this week from a successful mission in the North Africa. Borrero and other indigenous delegates from around the world were invited to participate at the United Nations World Summit on the Information Society held in Tunis, Tunisia from November 16-18.

At a special event entitled “Indigenous Peoples and the Information Society”, Borrero reported on situations in Latin American and the Caribbean, highlighting some of the concerns, challenges and best practices of the region’s indigenous peoples with regard to information technology and the growing “digital divide”. The event was sponsored by the Government of Canada and the Secretariat of the Permanent Forum on Indigenous Issues. A final report on the event as well as its summary presented in the Summit’s plenary session will soon be available for distribution.

At the opening of the Summit United Nations Secretary General Kofi Annan stated "that [WSIS] must be a summit of solutions. It must push forward the outcome of the World Summit held two months ago at the United Nations in New York. It must lead to information and communications technologies being used in new ways, which will bring new benefits to all social classes. Most of all, it must generate new momentum towards developing the economies and societies of poor countries, and transforming the lives of poor people.”

While in Tunisia President Borrero took the opportunity to promote the rights of Caribbean Indigenous Peoples during several news conferences where he presented along with other indigenous leaders such as President Joe Shirley Jr. of the Navajo Nation. According to the U.S. Census the Navajo have the second largest Native American population in the United States after the Cherokee Nation. “This was an important opportunity to again highlight the unique situation of Caribbean Indigenous Peoples before an international forum” said Borrero. “Our participation along side our indigenous relatives from throughout Latin America and from around the world, not only affirms our right to self-determination but we are also providing a platform and precedent for our younger people to get involved”. He continued saying “The use of internet and telecommunications technology is not something of our ancient past but it is something that our younger generations are growing up with and they need know there is an opportunity for them to use this technology as a tool that will benefit all our people.”

Follow up on the WSIS and future work with regard to Indigenous Peoples and the Information Society will continue with the creation of an Indigenous ICT Task Force. The Indigenous Caucus present in Tunis, which included WSIS International Indigenous Steering Committee members (IISC) and others, affirmed that current indigenous members of the IISC will comprise a part of the new task force. The members of the IISC, two delegates per region, were elected at a WSIS indigenous planning conference for Tunisia held in Ottawa, Canada from March 17-18 2005. The new Indigenous ICT Task Force will also include two additional indigenous members from each region. The seven international regions currently recognized in this process are North America, Latin America and the Caribbean, Russia and Eastern Europe, the Arctic, the Pacific, Asia, and Africa.

As per the decision of the Latin American and Caribbean delegates present in Tunis, the regional focal points for the new Indigenous ICT Task Force include Eliane Potiguara (Brazil-Amazon), Tarcila Rivera (Peru-Andes) and Roberto Mucaro Borrero (Caribbean). An additional focal point position is reserved for an indigenous delegate from Central America or Mexico. 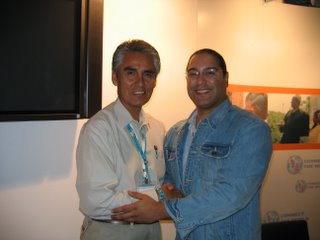