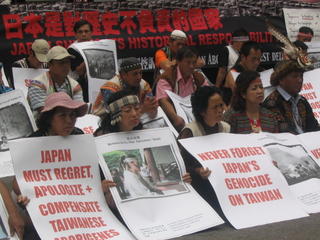 The delegation was seeking to bring attention the brutality of the Japanese government against the Aboriginal Taiwanese community during its 50-year colonization on Taiwan (1895-1945). After three years of urging Japan to recognize the atrocities and return the remains of indigenous Taiwanese being held in Japan to Taiwan, the community has been ignored and is now seeking support of the international community.

During their visit to the New York, the delegation met with representatives of the Flying Eagle Woman Fund and American Indian Community House, fulfilling wish of the Aboriginal Taiwanese people to meet with their Indigenous brothers/sisters on Turtle Island.

At a press conference held in front of the United Nations, UCTP President and Chairman, Roberto Mucaro Borrero expressed support for delegation and compared the situation to recent protests held in Puerto Rico by indigenous Taíno peoples. Borrero was also honored to read the official statement of the Flying Eagle Women’s Fund, which called upon all indigenous peoples to support the Aboriginal Taiwanese in their struggle for long overdue justice.

Following their visit to the United States, 10 members of the delegation will leave for Osaka, Japan where they join other protesters and await the Japanese high court’s judgment on the case. 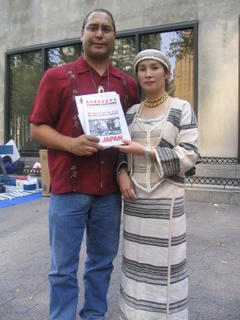