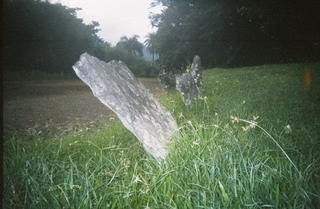 Some of the neglected stones at the Caguana Ceremonial Center. (Photo: Elba Anaca Lugo)

The impasse is creating mounting pressure on the Office of Governor Anibal Acevedo Vila, which continues to publicly ignore the Taino’s call for recognition of their basic human rights.

“The Governor is well aware of the situation but it seems that his administration is seeking resolution of the occupation through the decision of the courts” said Hernandez. “We have demonstrated to the Governor not only that we will not be moved so easily but we have growing local and international support”.

On August 8th, a call from the United Nations Permanent Forum on Indigenous Issues was made to the Governor’s Office to inquire about the health of Naniki Reyes Ocasio, a Taino leader who has been on a hunger strike for 16 days. The Governor’s representative reported to the UN official that “Naniki” was not on an actual hunger strike nor could the group prove their aboriginal claims. In an attempt to display Governor Acevedo Vila’s humanity, his representative also reported to the UN that they have sent rain gear and shelters for the protesters.

The Taíno protesters vehemently deny all these claims.

“Until yesterday, no one, not even the Mayor of Utuado has been allowed into the Ceremonial park with the exception of 911 paramedics" stated Hernandez.

As a result of the allegations being perpetuated against them, yesterday August 9th, the protesters secured Dr. Carlos Morales who entered the park and certified that Naniki Reyes Ocasio has indeed been engaging in a hunger strike for 15 days.

While the group will follow up on the criminal charges on Friday, they are still awaiting their imminent arrest for failing to appear before an Utuado judge last week. Arrests of the protesters are expected as early as this afternoon but no conditions restricting their return to the state run archeological park were stipulated.
Posted by Roberto Mucaro Borrero at 12:00 PM