It is my hope that at the time you receive this message you are in good health and Spirit. On behalf of the United Confederation of Taino People (UCTP), I am writing to share some background information on the issue of sacred sites, ancestral remains and the Caguana Ceremonial Center in Utuado, Puerto Rico. This information may be helpful in understanding the importance of the current occupation of Caguana and the efforts to secure Taino rights in Puerto Rico and beyond. 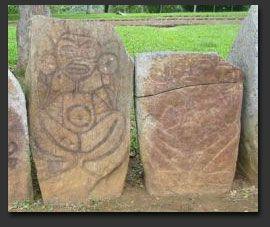 1.) Taíno Perspectives on the Sacred Sites and Reburial

THE ISSUE OF INDIGENOUS PEOPLES AND SACRED SITES: A FOCUS ON THE CARIBBEAN (2003): http://www.iccsus.org/IstConf/424.html

UCTP Submission to the UN Permanent Forum on Indigenous Issues, under Item 4(e) CULTURE (May 2003): http://www.uctp.org/pfsub.html

They Must Be Re-Interred And Allowed To Rest In Peace (By Naniki Reyes Ocasio):
http://www.uctp.org/funeralcustoms.html

An Overview of the `Health of Mother Earth' Sacred Places Conference in San Diego, CA (by DeAnna Sarobei Rivera): http://www.uctp.org/Volume5/OctDec2002/


2.) Information on the Caguana Ceremonial Center in Utuado, Puerto
Rico

Caguana: A Potential Solar Observatory? Angel Rodriguez Alvarez sends a report of his ongoing research on the Caguana Ceremonial Center, an ancient ball court in Puerto Rico. The archaeological remains of ball courts are found throughout the American Southwest, Mesoamerica and the Caribbean Area. Of all the Antilles, the greatest number of ball courts are found in Puerto Rico. These plazas are characterized by rows of upright stones embedded in the ground to delimit the area. In Puerto Rico, the most important of these sites is the Caguana
Ceremonial Center. The Caguana Site is a large ceremonial center constructed during the late prehistoric and early protohistoric Capa Phase (A.D.1200-1500), and occupied by the Tahino indians up through contact with the Spaniards. The site consist of 10 earth and stone line ball courts, making this the largest of its kind in the entire West Indies.

In essence, The Caguana Site, as a ball court and ceremonial center had different functions: First, it was used for ceremonial dances, religious rituals and other rites; second, it was used for playing ball games in which two teams of equal in numbers tossed a ball to each other; and third, we believe it was used to make astronomical observations . The aim of the present study is to determine if there is any relationship between the aligment of the ball courts in Caguana with the sunrise during the solstices and equinoxes. Results indicate that two row of slabs on Plaza A are aligned toward the Autumn and Spring Sunrise. Also, the two shorter sides of Plaza B are aligned toward the Summer Solstice Sunrise. In addition to the Summer Solstice and Equinox Sunrise, the Tahino Indians could also observed the Full Moonrise along Plaza A.