Occupation Ends in Arrests but Taíno Claim Victory in Boriken 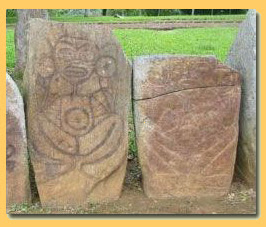 Utuado, Puerto Rico (UCTP Taino News) – After their arrests on Wednesday, August 10, Taino community leaders celebrated a victory in court on Friday, when a local Judge refused to give an order to prevent them from re-entering a state run archeological park they consider sacred. The court did find however that the Taíno did not have the right to "exert dominion and control of the park", at least temporarily. A decision will be made on the issue of dominion at an upcoming hearing.

The Taíno occupied the Caguana Indigenous Ceremonial Center in Utuado for over two and a half weeks to bring attention to island wide destruction of sacred sites and the lack of recognition of their rights as indigenous peoples.

"The court basically is reviewing an injunction that seeks to temporarily or permanently prevent us [Taino] from staying over night on the grounds, which is a direct violation of our religious freedoms" said Naniki Reyes Ocasio, founder of the Caney Quinto Mundo. "The court and the [Puerto Rican] Institute of Culture view `dominion' as a form of possession so it is obvious that they have no concept of indigenous perspectives as they relate to those terms"

She continued, "If the Institute had their way they would have barred any one identifying themselves as Taino from entering the park permanently but this did not happen".

Reyes Ocasio was observing her 16th day of a hunger strike when she and two other community member supporters, Guatibiri Baez and Juana Griselle Martinez Prieto, were arrested Wednesday inside Caguana Ceremonial Center.

"Seeing those officers trotting down to us in rows of five was like watching something out of an old Western movie when the Calvary moves in to attack an unsuspecting Native village" observed Reyes Ocasio. With no arrest warrants presented, the three peaceful protesters were forcibly shackled by hands and feet by a 15 member special police tactical unit in full assault armor.

Reyes Ocasio, Baez, and Martinez Prieto noted that the police did all they could to attempt to frighten and humiliate them. A previous court negotiation assured the protesters they would be arrested with their lawyer present and that Naniki would be provided a wheel chair as she was having trouble walking; a result of her long hunger strike. "They did not comply with any of conditions they agreed to in court; this was a well calculated assault with intent to harm us" she stated as she ended her 17 day fast late Thursday night.

Three other protesters, members of the Consejo General, Elba Anaca Lugo, Taino Rosado and Margarita Shashira Muñoz, turned themselves over to the authorities on Thursday morning. They were outside the park at the time of the arrests. Charges were dropped against additional participants of the occupation.

"Despite the harsh treatment, which even included a strip search of two of our community members, we are celebrating a victory here in Caguana for a number of reasons" said Reyes Ocasio.

The action has reportedly been an inspiration to many Taino descendants around the island and beyond. A delegation of elders, leaders and youth now plan to take the group's concerns and petition to San Juan on Monday and deliver them to legislative representatives, the Mayor of San Juan and of course to the Governor.

"We have exposed the Executive Branch of the Government and the Institute of Culture not only for failing to recognize indigenous rights but they are now well documented to be publicly hostile to the Taino People on the island" said Roger Atihuibancesh Hernandez, a representative of the United Confederation of Taíno People.

"The Caguana action is a victory for all Taíno People as we have raised the issue of Taíno rights, as well as the desecration of sacred sites, ancestral remains, and sacred artifacts to an unprecedented level here in Borikén" he continued. "We had regular coverage in local papers and our leaders were interviewed on radio and television throughout the occupation".

"Whether the press has been favorable or not is not the point, what matters is that no one can say we have been silent on this issue" said Atihuibancesh.

During the occupation local support gained momentum for the Taíno as a group of prominent archeologists publicly supported the group's actions. Although they were ignored by Puerto Rican Governor Anibal Acevedo Vila, they were supported at the municipal level with a special proclamation by the honorable Mayor of Utuado, Alan González Cancel.

As the group celebrated their victories in Caguana, many lessons have been learned and all the leaders remain extremely grateful for the overwhelming support they have received from the local and international communities.
Posted by Roberto Mucaro Borrero at 7:10 AM