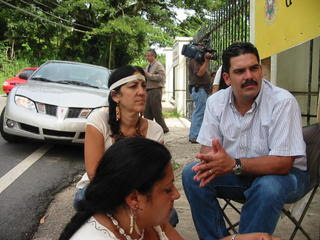 Utuado, Puerto Rico (UCTP Taino News) – After 10 days of occupying the state run Caguana Indigenous Ceremonial Center in Utuado, Puerto Rico arrest warrants have been issued for the indigenous Taíno protesters. Utuado Judge Concepcion Figueroa has charged five of the activists with contempt of court for failing to appear before her this morning. Bail has been set at one thousand dollars for each one of the activists and a trial has been set for the fourth of October . The Taíno reclaimed the ceremonial center in an effort to draws attention to the island wide desecration of sacred sites, and the lack of recognition of their basic human rights.

The Taíno now await the arresting police officers to appear at Caguana and remove them from the grounds that they consider sacred. One protester, Naniki Reyes Ocasio, has been on a hunger for nine days will need medical assistance as she is having trouble walking. The other six hunger strikers have ended their fast but remain vigilant at the site. “Spiritually I feel so strong and I know that it is the prayers of the people and the ancient ones who are sustaining me” said Reyes Ocasio. “I am very clear in my thoughts and I am aware that many supporters have concerns for my health but I want everyone to know that I will continue to fast for as long as I can so that our petition can be heard.”

Roger Atihuibancex, a representative of the United Confederation of Taíno People added “The fact that the Governor’s Office has not officially responded to the petitioners who have been engaged in a hunger strike for over a week should make it clear to the world that the Taíno and our concerns are being completely ignored”

Reyes Ocasio, who is the founder of the Caney Quinto Mundo (Fith World Learning Center), continued by stating “In denying the people he was elected to serve access to his offices, the Governor and his administration have demonstrated to the world their inhumanity and feelings toward Indigenous Peoples”. She has requested that supporters continue to apply pressure on Governor Anibal Acevedo Vila to meet with the Taíno protestors.

The Caguana Indigenous Ceremonial Center is an archeological park run by Puerto Rico’s Institute of Culture and the Taíno have received no sympathy from this agency. The Institute’s Executive Director, Dr. Teresa Tio, has publicly denounced the activists, comparing them to cannibals and terrorists. The Director is currently facing her own problems with her own staff as calls for her resignation are being made. For the last two days her staff members have picketed in front of the Institute’s offices in San Juan citing her dictatorial management style. In yesterday’s edition of Puerto Rican newspaper El Nuevo Dia, Dr. Tio has stated that increased security at the Institute which barred the protesting employees from entering the premises was necessary because of the action of the “alleged Taínos in Caguana”.

The Taíno and their action in Caguana have not gone unnoticed or unsupported by island residents or the international community. Yesterday, the Mayor of Utuado, the Hon. Alan González Cancel, expressed his concerns for the Taíno protesters as well as the importance of the ceremonial center. Representatives of the Consejo General de Tainos Boricanos (General Council of Borikén Taíno) will meet with him to discuss their concerns on Friday.