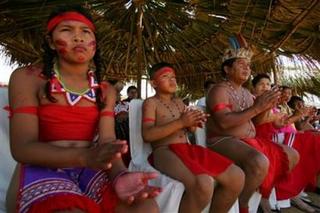 Members of the Karina tribe applaud Venezuelan President Hugo Chavez during his speech during a land title ceremony in the Eastern Santa Rosa de Takata, Venezuela, Tuesday, Aug. 9, 2005. Chavez presented land titles to six indigenous groups, seeking to recognize their rights to traditional lands and reverse what he says have been centuries of discrimination. (AP Photo/Fernando Llano)

President Hugo Chavez said he hoped the government would be able to turn over titles to 15 other indigenous communities by the end of the year.

"What we're recognizing is the original ownership of these lands," Chavez said during the ceremony. "Now no one will be able to come and trample over you in the future."
He was joined by Kari'na Indians wearing traditional dress, face paint and strings of colored beads.

But Chavez warned that the process of granting legal ownership must respect Venezuela's "territorial unity," and he urged other indigenous groups not to ask for "infinite expanses of territory."

"Don't ask me to give you the state's rights to exploit mines, to exploit oil," Chavez said. "Before all else comes national unity."

The documents recognize land ownership by six indigenous communities with some 4,000 people and territory covering 314,000 acres in the eastern states of Anzoategui and Monagas.

One woman from the Kari'na community thanked Chavez, saying: "He has been the first president who has kept his word to a people who have been stripped of their lands."
An estimated 300,000 Venezuelans belong to 28 indigenous groups, many living in the country's sparsely populated southeast.

South American countries have made various efforts to grant indigenous groups legal ownership and control over their traditional territories.

In neighboring Colombia, indigenous groups in officially recognized communities can administer justice, receive state funds and have their own government. Brazil has set aside more than 12 percent of its territory for indigenous communities, and in Peru various laws declare the rights of indigenous groups to ancestral territory in the Amazon.

But problems have arisen in some countries as miners and loggers have moved onto Indian lands. And in various countries, a key debate has revolved around the state's rights to what lies underground, such as oil and mineral wealth.
Posted by Roberto Mucaro Borrero at 1:02 AM