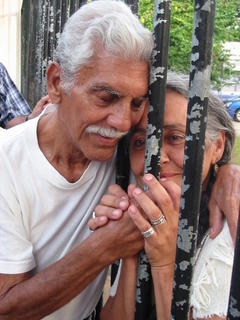 Utuado, Puerto Rico (UCTP Taino News) – It is the 13th day of a hunger strike for Naniki Reyes Ocasio, a Taíno Indian leader who is trying to bring attention to the lack of recognition of Taíno Rights in Puerto Rico. She and several other Taíno leaders from around the island have been occupying the state run archeological park, the Caguana Ceremonial Center, in Utuado Puerto Rico for over two weeks. The group inside the park and their supporters outside the park have stated they will leave the grounds, which they consider sacred, if a meeting with Puerto Rico’s Governor Anibal Acevedo Vila can be secured. As of today, there has been no official communication from the Governor to the protesters or any statement from his administration on this issue.

“The desecration of sacred sites and our ancestor’s remains has been going on for far too long, and our pleas for change and dialogue have been ignored” stated Naniki Reyes Ocasio. “We will continue here in Caguana for as long as we can to bring attention to this issue”

The candle light vigil that we will observe tonight from 8-8:30pm tonight is a call for solidarity for our sister and leader Naniki” said Roger Atihuibancesh, a representative of the United Confederation of Taíno People who is supporting the action with others outside the park. “We obviously are concerned for her health but we know our ancestors and all the prayers coming from around the world are sustaining her”. Although the Taíno entered the park on Sunday July 24th, the first official day of the occupation was set to coincide with the celebrations of the Day of the Puerto Rico Constitution on the 25th. The Taíno chose this day to highlight the lack of recognition of indigenous rights in the constitution of Puerto Rico.

While there has been no word from the Governor, and the island’s Institute of Culture has been hostile to the peaceful protesters, the Taíno continue to gain support from island residents and the international community. 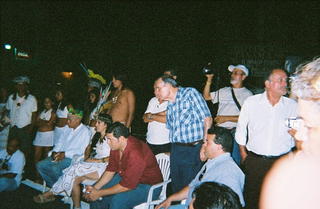 Yesterday, the Mayor of Utuado, the Hon. Alan González Cancel, expressed his support for the Taíno protesters in a meeting held with the protesters in front of the park. With about 250 supporters in attendance, Mayor González Cancel read an official Proclamation, which supported the action, the Taíno protesters, and the importance of Caguana Ceremonial Center. He proclaimed the 25th of July a special day of commemoration for the Taíno action in Utuado. The Taíno responded positively as elders accepted the Mayor’s Proclamation on behalf of the local community. Taíno presented songs and dances, which were enjoyed by community residents and the Mayor’s entire cabinet.

The protesters are due to appear before a local judge tomorrow to answer to additional charges being pursued by the Institute of Culture against the Taíno for the occupation. Last Thursday, arrest warrants were issued for 5 protesters including Naniki Reyes Ocasio but police have not come forth to remove them.