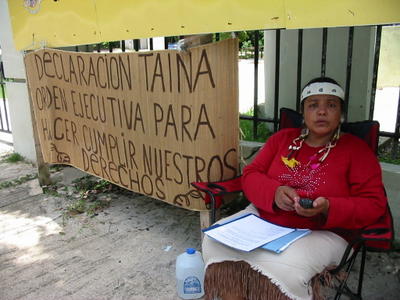 Yesterday the Taíno leadership met with representatives of Puerto Rico’s Institute of Culture and the municipality of Utuado to negotiate an immediate settlement. Along with the long standing issue of Taíno remains being displayed at the site, recent problems at Caguana are said to stem from ongoing construction. Renovations are now entering the ninth month, making the area inaccessible to the general public including local Taíno who view this as a violation of their freedom of religion.

Island wide abuses of archeological sites and indigenous cultural material are deemed unacceptable by the local Taíno. As increased development takes place throughout the island, Taíno leaders have noted increasing destruction and desecration of burial grounds, sacred places and ancestral remains. According to the Taíno these conditions do not only violate their religious freedoms but they do not comply with federal, state, or municipal legislation concerning these issues. A case concerning the destruction of a Taíno ceremonial site is now being heard in the town of Caguitas.

The Taíno also note that the provisions of U.S. federal legislation such as the Native American Graves Protection and Repatriation Act have yet to be enacted in Puerto Rico. Elba Anaca Lugo, the President of the Consejo General de Tainos Boricanos, stated that reclaiming of Caguana is part of a larger national campaign to raise public awareness about issues of national patrimony and indigenous rights.

A representative of the United Confederation of Taíno People, Roger Atihuibancex noted there was overwhelming support of the action from the many families who arrived to visit the Center only to find it closed to the public due to the protracted construction. Park management staff offered to expedite the completion of the construction before September as a negotiating point. The staff has also threatened arrest of the activists if they do not vacate the area.

The Taíno leaders are currently reviewing all options while camped in a ceremonial plaza named in honor of 16th century Taíno leader Agueybana. A concern is that key agency officials were unavailable to offer their decision making powers as the island is celebrating adjoining holidays from Monday through Wednesday. The municipal staff is not empowered to enact the requests by the Taíno leadership. Naniki Reyes Ocasio, founder of the Caney Quinto Mundo has vowed to remain until representatives of the Governor’s office arrive to discuss the community’s demands.

Margarita Shashira Muñoz, a Taíno community elder from Vega Baja taking part in the occupation expects warrants to be issued shortly as the action has created an embracing situation for government officials. As support letters for the Taíno continue to arrive from throughout the world, local supporters like Taíno elder Manuel Galagarza expressed his happiness that the younger generations are standing up for their rights and continuing the legacy of indigenous resistance in the Caribbean.

Officials have so far been unable to follow through on the threat of arrest, as local magistrates needed to expedite the orders cannot be located due to the holiday.
Posted by Roberto Mucaro Borrero at 11:09 AM