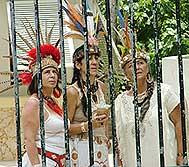 UTUADO, PUERTO RICO (UCTP Taino News) – A group of indigenous Taíno Indian community leaders have been occupying a state run archeological park in Utuado, Puerto Rico since Sunday. The Taíno are protesting the desecration and destruction of sacred sites around the island as well as other violations of their human rights.

After local authorities in Utuado assured the group there would be no arrests, police may be set to vacate the Caguana Ceremonial Center as earlier as tomorrow afternoon. The authorities have now served the leaders with a citation to appear in court tomorrow morning at 9m. Naniki Reyes Ocasio, a Taíno leader from Orocovis has stated that they will not vacate the ceremonial grounds, which they consider sacred. “We are exercising our basic human rights to bring attention an issue that has been ignored by this and previous administrations” she said. “We have still not heard anything from the Governor’s office.”

Police and park officials have now shut off access to the activists while a large crowd of Taíno descendants and supporters continues to gather outside the gates.

“We are now going through a process of purification physically and spiritually” stated Elba Anaca Lugo a Taíno leader who was born in Utuado. “Seven of us have decided to begin a hunger strike until the Governor decides to meet with us here.”

The group states that the occupation was necessary to bring attention to the continued violations of indigenous rights on the island. Past calls for official dialogue have been ignored. The Taíno are calling for increased local and international pressure on Governor Aníbal Acevedo Vila to secure a meeting to discuss their issues formally. Support letters and phone calls to the Governor’s Office are urged as the threat of police action draws closer.
==========================================
UCTP Taino News Editor's Note:
*For Information: Roberto Múcaro Borrero 1-212-604-4186

*THE TAINO LEADERS INVITE THE GENERAL PUBLIC TO UNITE AND SUPPORT THIS CAUSE AND TO SEND LETTERS OF SUPPORT TO THEIR EMAIL ADDRESSES: caney@prtc.net, uctp_ny@yahoo.com, anacatoao@hotmail.com, tribucoabey@yahoo.com.
Posted by Roberto Mucaro Borrero at 7:24 PM