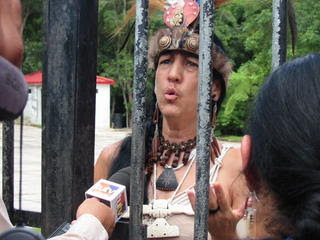 Utuado, Puerto Rico (UCTP Taino News) – In a message sent this afternoon, the Judicial Administration of Puerto Rico has communicated that they will make no arrests at a state administered archeological park currently occupied by local Taíno Indians. The Taíno are protesting the desecration and destruction of sacred sites around the island as well as other violations of their human rights.

The officials have expressed their serious concern and have now scheduled a meeting with the indigenous leaders. Naniki Reyes Ocasio, a Taíno community leader from Orocovis stated that there has still been no official communication from the Governor of Puerto Rico, Aníbal Acevedo Vila, concerning the issue. A hunger strike is now being considered by the Taíno activists until the Governor himself appears at the Caguana Ceremonial Center in Utuado.

There has been widespread press coverage at the site located in the mountainous region of the island and numerous interviews have been conducted. From the local Puerto Rican press to international radio, general support is continuing to amass. A growing number of Taíno Indian descendants are now centralized around the site. The neighboring community around Caguana is also beginning to express their support and many elders are now participating. The occupation calls attention to the situation of the Taíno People who are the descendants of the first indigenous peoples of the western hemisphere to encounter Christopher Columbus in 1492.

The Taíno leaders who have occupied the ceremonial grounds since Sunday now await word from Executive Cabinet Officials concerning the arrival of the Governor.
Posted by Roberto Mucaro Borrero at 7:06 PM