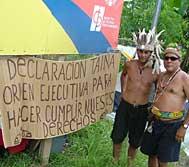 From left, Taíno Activists Josué Xuerix Camacho and Roger Atihuibacex protesting at Caguana Ceremonial Center in Utuado, Puerto Rico.
Utuado, Puerto Rico (UCTP Taino News) – On the 7th day of the indigenous occupation of a state-run archeological park, Taíno activists are now reporting increasing levels of cruelty by a hired “goon squad” in Puerto Rico. The Taíno have been occupying the park in an effort to draw national and international attention to island wide desecration of sacred sites and the lack of recognition of their basic human rights.

On Thursday, Utuado Judge Concepcion Figueroa directed the local representatives of the Puerto Rico’s Institute of Culture to resolve the situation through civil means and not use police. Shortly after, a private security force was hired and has been terrorizing the Taíno protesters inside the Caguana Ceremonial Park. The press, legal advisors and supporters are being denied direct access to the group, some of whom are on their six day of a hunger strike. The Institute of Culture has ordered the park’s electricity and water shut off and will only allow medical services if there is a 911 call. An ambulance has already been called twice to administer aid and two protesters were treated for dehydration. Paramedics have stated that if there is another 911 call they will have to remove one protester, Taina Rosado, from the premises and admit her into a hospital.

Three protesters made it to the park’s gates to inform supporters of the increasing harassment by club waving guards from the Genesis and Caribbean security companies. “The guards have threatened our leaders with bodily harm and are not allowing them any rest at night by continuously taunting them with spotlights and shouts” stated an Roger Atihuibancex Hernandez, a representative of the United Confederation of Taíno People.

The group’s legal counsel Maurico Hernandez stated “Although they are weak from hunger and despite the inhuman treatment, the protesters will not be deterred and have vowed to remain until they can secure a meeting with the Governor”

The Office of Puerto Rico’s Governor Anibal Acevedo Vila has been silent despite increasing international attention to the situation. “The Taíno protesters have been receiving letters from indigenous peoples and other supporters from all over the world” stated Hernandez. Letters to the Governor have been sent from the International Indian Treaty Council, which is the oldest indigenous NGO accredited to the United Nations and the United Nations Development Programme (UNDP). Other letters have come from throughout the United States and as far as Belgium, Italy, Hawaii, Canada, New Zealand, Tibet and India. Television, radio and newspaper reports have also been increasing attention on the occupation.

Yesterday, Puerto Rico’s El Nuevo Dia newspaper revealed the disdain that officials have for Taíno in Puerto Rico as the Institute of Culture’s Executive Director Dr. Teresa Tio publicly issued various discriminatory remarks against the group, which included denying their legitimacy. In a response that would be well suited for a 15th century Spanish Conquistador Dr. Tio also demeaned the Taíno’s call for religious freedom by stating the Institute “would not allow cannibalism or the sacrifice of captured enemies to take place there”. No such demand was ever issued by the Taíno.

As increased local and international support is being sought, the Taíno have stated via the news media that they will leave the Ceremonial Grounds if they can be assured in writing that a meeting with the Governor will take place.

The Taíno expect a barrage of phone calls and letters to inundate the Governor’s Office on Monday as the eyes of the world turn toward Puerto Rico.