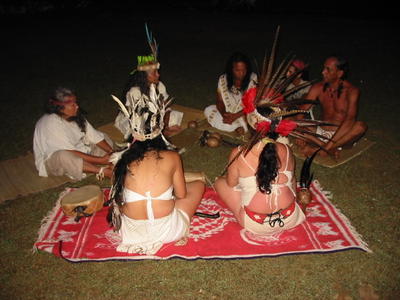 Utuado, Puerto Rico (UCTP Taino News) - At 6:00 p.m., last night, Judge Concepcion Figueroa found no probable cause for trespassing, and dismissed this charge against the Taíno Indians occupying the Caguana Ceremonial Center in Utuado, Puerto Rico. Since Sunday, the Taíno have been occupying the grounds to protest the desecration and destruction of sacred sites around the island as well as other violations of their human rights.

The Court dismissed all charges against Sonia Viro Acevedo as it was found she had left the Park and was instead outside in support despite testimony by prosecutors to the contrary. A new case against another protestor was also dismissed for failure to issue the proper citation.

However, the Judge found probable cause that the accused were exercising dominion and control of the area, based upon false testimony regarding dangers and alleged possible destruction of property at Caguana. Judge Figueroa, Court of First Instance, in Utuado, ordered an August 3rd hearing to then schedule a trial date.

The Judge refused to issue any order on bail as she found that the protestors were not a risk of flight. She denied the District Attorney’s requests for a condition that the protestors leave the premises. The judge stated that in misdemeanor cases, an order of eviction or removal was inappropriate as the issue can be resolved through the appropriate legal civil remedies. The DA stated that those civil recourses were out of his jurisdiction.

The Judge also told the Institute of Puerto Rican Culture’s representatives not to use the police or criminal charges to evict the protestors and to resolve the issue through civil legal process. The prosecution attempted to persuade the Judge that the Park’s construction was held up by the protestors and would cause irreparable harm. The prosecutor’s misrepresentation in Court omitted that the 8 month closure of the Park was due to contractor’s non-compliance and an alleged fine for delay had been issued. The project was three months delayed before the Taíno occupation.

The numbers of Taíno leaders inside the park has increased based on concerns of security. The Institute of Culture has ordered that the lights and water be shut down every night, and are refusing access to the restrooms in an attempt to force the protestors out. The archeological park’s staff has also refused entrance on two occasions to the legal advisors of the Taíno leaders.

After the legal victory, the local representatives of the Institute of Culture, Attorney Boneta and Director Heidi Quintero, capriciously set new conditions on a previous and informal offer for the Taíno to meet with Dr. Teresa Tió, Executive Director of the Institute of Puerto Rican Culture. The Institute’s representatives now state that a meeting will only take place if the protesters vacate the grounds. The meeting was offered for Monday August 1st in San Juan but Quintero refused to put anything in writing stating that “her word was good enough.” This commitment was expressed shortly after the court decision in the presence of DA Richard Rosado, Attorney Adrian Torres Rodriguez and the Capitan of the Utuado Police Department.

The failure of the Puerto Rico’s Governor and the Institute of Culture to send a high level representative to negotiate and dialogue in good faith has increased tensions outside the Park with growing number of supporters. Concern for the health of the Taíno protestors, some on their fourth day of hunger strike, is increasing.

The Taino are firm in their demands to meet with Governor Anibal Acevedo Vila to discuss this issue and will not leave Caguana without resolution.
Posted by Roberto Mucaro Borrero at 3:00 PM