Dominica's Carib Indians to be Portrayed as Cannibals in Movie Sequel 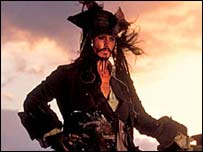 ROSEAU, Dominica: The BBC has reported that the "Pirates of the Caribbean" sequels plan to portray Dominica's Carib Indians as cannibals. Shooting on the films is expected to take place this April in the area, with hundreds of Dominicans applying to be extras in the movie.

The cast and crew are to work on two sequels back-to-back, with the first to be released in 2006.

Carib Chief Charles Williams said talks with Disney's producers revealed there was "a strong element of cannibalism in the script which cannot be removed".

The Caribs have long denied their ancestors practiced cannibalism. "Our ancestors stood up against early European conquerors and because they stood up...we were labelled savages and cannibals up to today," said Williams.